How Common Are Skydiving Accidents? 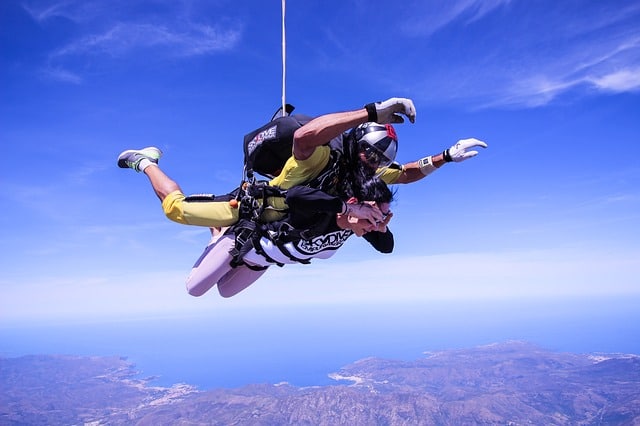 Skydiving accidents are relatively rare, accounting for one in every 1,536 skydives or 0.07 percent of all jumps each year. When skydiving accidents happen, however, disabling injuries and deaths often result.

How Dangerous is Skydiving?

According to the United States Parachute Association (USPA), skydiving accidents and injuries account for only 0.07 percent of total parachute jumps every year. Fatalities accounted for only 0.0004 percent of jumps. In 2018, there were 2,147 injuries and 13 deaths, equating to one injury in every 1,536 jumps and only one death for every 253, 669 jumps. In 2018, USPA recorded roughly 3.3 million total jumps around the country.

The first skydiving records date back to 1961. There were only 14 fatalities, but there were fewer jumpers. That year there were only 3,353 USPA members, compared to 40,000 members today. In the 1970s, skydiving averaged 42 fatalities each year, but numbers have dropped with each decade. In the 1980s, there was an average of 34 deaths; in the 1990s, the average was 32.3, and between 2000-2009, the average dropped to 26. Over the past decade, the annual average has continued to decline. The USPA works diligently to reduce skydiving accidents and injuries and promote skydiving safety with proper training.

In the U.S., most avid skydivers are male, making up 87 percent of jumpers. Men between ages 30-39 account for 20 percent of skydivers, while men 60 years old and older account for 23 percent. Studies show that skydiving is actually a very popular activity among retirees over the age of 65. Many seniors say they want to experience new activities before they die, even if they involve a certain amount of risk for injuries. Retired men who served in the military during World War II and the Vietnam War often associate the thrill and adventure of skydiving with their youth and vitality.

What is the Risk of Dying in a Skydiving Accident?

Why is skydiving often perceived as a more dangerous activity with a higher risk of death?

When skydiving accidents occur, it’s difficult to imagine that someone could walk away without getting killed, but that’s exactly what occurred in two separate skydiving jumps in the last five years.

In 2019, a Canadian woman survived a 5,000 fall after her parachute failed to open. As she got close to the ground, she hit a patch of trees in a wooded area that broke her fall. Miraculously, the woman only suffered injuries that were not life-threatening, including several bone fractures and broken vertebrae. She is currently recovering from her injuries with physical therapy and rehabilitation.

In 2014, a Texas teenager survived a 3,000-foot fall. Makenzie Wethington, a 16-year-old teen, was making a static-line jump, where a parachute is connected to a lanyard that’s attached to the plane and opens automatically when a diver exits the plane. The girl’s parachute opened, but she spiraled quickly downward. Makenzie suffered serious injuries including a broken pelvis, broken vertebrae in her lower back, a broken shoulder, several broken ribs, and a damaged liver.

If injuries occur while skydiving, the injury victim may be able to file a personal injury lawsuit against any of the following parties:

In most cases, courts hold only skydiving recreation companies, training centers, and instructors liable for accident and injuries. However, liability against these parties usually depends on whether the incident included negligence and whether a release waiver was signed, a standard practice for skydiving activities.